Like any other living creature, Gorillas also have enemies known as predators – man is the chief enemy of Gorillas. Man kills gorillas on traps, gun shoots, spears among others – in some countries like Democratic Republic of Congo, Gorillas are killed for meat and some times for fun. The only predator to prey on gorillas is the leopard. Walter Baumgärtel found the remains of several gorillas after they had been killed by leopards in the Virunga Volcanoes. Another case has been confirmed in Gabon, where a sick young gorilla was killed by a leopard. 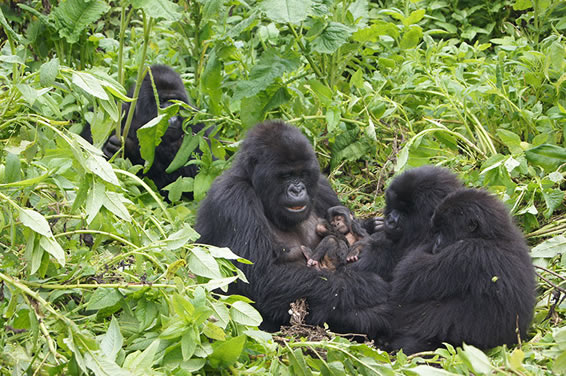 Charge bared teeth, when facing a predator or detect any threat, the dominant male (silverback) in a group of gorillas will often charge it with teeth bared. In so doing, the enemy animal or man can be scared and disappear.

Beating of chest, While running toward the aggressor, the gorilla may beat his chest, scream or shack or break vegetation. In the process the enemy may disappear.

Pick sticks or break sticks, sometimes, gorillas even pick up and swing sticks at the threat or in the air. If the aggressor stands his ground, the gorilla will often break off the attack, as it is primarily designed as a bluff. However, if the animal turns and runs, the gorilla interprets this as weakness, and pounces on it. Large male gorillas are much stronger than humans or any predators that may attempt to hunt them.

The large size of Gorillas scare aggressors, Large males form harems of several females, their offspring and a few subordinate males. The dominant male will defend the group from all threats. Dominant male gorillas may exceed 400 pounds in weight, while females and subordinate males are typically smaller. The size of gorillas is enough to thwart most predators, and the primary species that threatens them is humans.

Moving with silverback for defense, like fathers at home, silverbacks are the strongest in the each gorilla group – they are taken as rescuers and defenders of the gorilla groups.

Gathering and moving in groups, Gorillas protect themselves by living in groups that are protected by a large, dominant male and by being secretive.

Gorillas Climb trees, gorillas are skilled climbers that can flee to the trees if pursued by a predator.

Silverback males give off a particularly intensive smell and emit characteristic sounds.

If you are interested in seeing the mountain gorillas in their natural habitat? It is possible! Most of you have seen these gentle giants in zoos, but you should go gorilla trekking in Rwanda or Uganda or DR Congo to see them in their natural environment. Organize and book a safari to any of the those destinations and you will be among the privileged people to see them in African wilderness! Many Rwanda safari operators organize cheap and amazing safaris to see the mountain gorillas in Volcanoes National Park in Rwanda, likewise, there are many Uganda tour operators organizing memorable gorilla safaris to Bwindi Impenetrable Forests and Mgahinga national Park in south western part of the country!