Rwanda is small, and easy to get around. You are rest assured that anyone from the country would urge you to come to Rwanda for holiday. Meanwhile, if you’re thinking of a safari in Rwanda, the main areas to consider are: 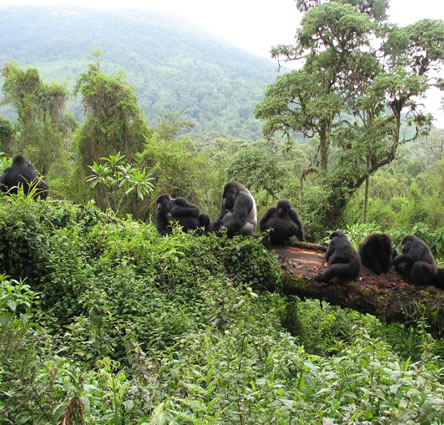 The main focus of interest for most visitors is the Volcanoes National Park, which incorporates Rwanda’s section of the Virunga Mountains. This chain of volcanoes is home to the worlds’ few remaining mountain gorillas; Rwanda has approximately half of the world’s population. With such a stunning backdrop, a gorilla safari here is the highlight of any holiday.

On the Rwanda side, which was made famous by Dian Fossey’s work, and the film Gorillas in the Mist. More than half of the world’s last mountain gorillas live here – about 350 of them – and at present it’s probably the best place in Africa for a mountain gorilla safari.

Even without the mountain gorillas, this park would be fascinating. Its altitude ranges from about 2,500m to the peak of Karisimbi, at 4,500m, resulting in extensive bamboo forests, and some of the last remaining afro-montane forest habitat on the planet.

Quite apart from the mountain gorillas, it harbours a spectacular array of rare and endangered animals and plants. There is a variety of other primates, including the endemic golden monkeys, plus forest elephants, buffalo, giant forest hogs (Africa’s largest swine), bushpigs, bushbucks, black-fronted duikers, spotted hyenas, and around 200 species of birds. On the higher slopes you’ll find an almost otherworldly habitat of thick moors with endemic giant lobelia and groundsel.

There are several options for accommodation near the park, and quite a range of choices – from simple and basic, to more upmarket:

New in December 2008, Gorilla Mountain View Lodge is a good, mid-range option with 30 individual cottages, a restaurant and a bar, all with views over the surrounding hills and volcanoes. It’s affordable and within 15 minutes’ drive of the park headquarters

The village-run Kinigi Guesthouse is a very simple and basic place to stay, close to the meeting point of many gorilla treks. It has a lounge area, a bar and 20 guest rooms.

The newest lodge in the area, and by far the most comfortable and luxurious, Sabyinyo Silverback offers spectacular views from its elevated position. Its six cottages and two suites are set in well-maintained gardens, all with private verandas, en-suite bathrooms and sitting rooms featuring fireplaces.

In 2004, the up-market Virunga Lodge opened in a stunning location, high on a ridge between Burera and Ruhondo lakes. It has eight spacious chalets, each with a large private veranda. It is eco-friendly, with hot bucket-showers and composting toilets, and furnished in a rustic fashion – it’s not plush and luxurious but is a very good lodge

Trips to trek to the mountain gorillas in Rwanda’s Volcanoes National Park are well-organized and clearly structured, with numbers limited to eight people per group per day. Seven groups of mountain gorillas are currently habituated, so a maximum of 56 trekking permits are available each day. Permits cost US$750 per person per visit, which may seem a lot but don’t begrudge it; this money provides Rwanda with a compelling economic reason to conserve the park and, amongst other things, pays for a 24-hour guard for each gorilla group. (Armed teams constantly track each habituated group – like royal bodyguards in the UK!)

You set off early in the morning to track to the apes from the edge of the forest. After a safety and gorilla-etiquette briefing, you’re led in a small group along generally clear paths up into the forest. The altitude is over 2,500m, so although the pace is unhurried, the hike is tiring, taking from 30 minutes to a few hours. Your English-speaking guides are very good, and will be taking you to a specific group of ‘habituated’ mountain gorillas, which they know well and are used to human visitors.

Look into the eyes of a large silverback gorilla and he’ll stare back. It’s a thinking, intelligent gaze, mindful that you’re another individual. It’s an encounter that transcends any other ‘wildlife’ experience that we know.

Other Attractions in Volcanoes National Park

Before visiting the gorillas, a guided hike up into the mountains for a day is good for acclimatisation… It also allows you to spend more time looking at the other wildlife in forest, and getting a better understanding of the overall ecosystem. A more gentle option is a guided trip to a troupe of habituated golden monkeys, which tend to inhabit the bamboo forests, on the lower slopes. You won’t normally get as near to the monkeys as you would to the gorillas, but the environment is interesting and with patience you’ll still get quite close.

It is also possible to do a day hike up Volcan Bisoke, which has a beautiful crater lake at the top, and also hike to the grave of Dian Fossey.