Queen Elizabeth National Park is a few most famous safari destinations that feature not only wildlife but also spectacular Lakes and mountains which offer the most stunning scenery altogether. It covers an area of about 1978 square kilometers making it the second biggest savanna grassland national park in Uganda after Murchison Falls National Park. 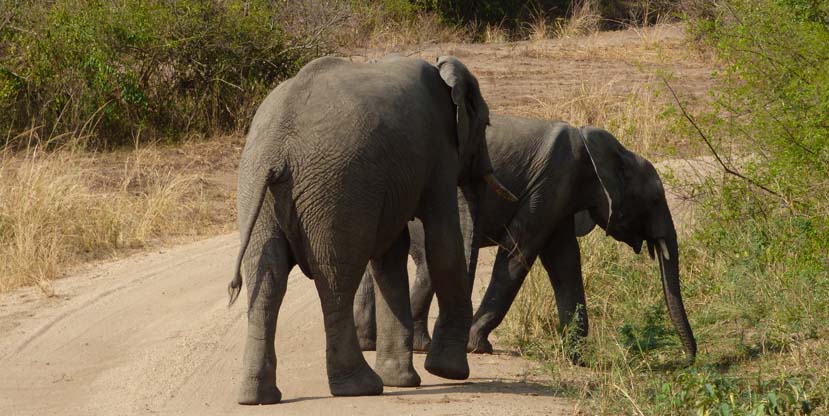 Queen Elizabeth National Park features both as a World Bio-sphere reserve and RAMSAR wetland site which at times is described as the pearl of Africa. Queen Elizabeth National Park lies in the southwestern part of Uganda along the mighty Rift Valley between Lake George and Edward and borders the Democratic Republic of Congo (DRC) on the western part.

Queen Elizabeth National Park was designated as a national park in 1952. It comprises of the Kyambura and Kigezi wildlife reserves which make up a total of over 2475 square kilometers. The park’s temperatures range from 18 degrees Celsius to 28 degrees Celsius. The rainy season in the protected area is experienced from March to May and September to November and the annual rainfall amount received per year ranges from 750 mm to 1250 mm at elevation of 910 meters above sea level in Lake Edward to 1390 meters above sea level in the Crater sector.

About 100 species of mammals and 620 species of birds thrive within this park offering diversity of attractions to world travelers. The prime wildlife species to spot include elephants, buffaloes, hippos, crocodiles, Uganda Kobs, lions, leopards, spotted hyenas, side striped jackal, giant forest hog and most of these are largely spotted from Mweya Peninsula. The Kyambura Gorge on the other hand offers refuge to chimpanzees; the Maramangambo Forest offers refuge to the attractive portion of forest monkeys and birds, four duiker species and several flamingos that are found along the crater Lakes.

The notable tourist activities for you to participate in Queen Elizabeth National Park include the following;

Wildlife viewing in Queen Elizabeth National Park is conducted in the morning and late in the evening. There is a 200 kilometer of well maintained tracks that offer travelers opportunity to realize their dreams with the park’s most incredible wildlife species. While on wildlife safari in the park, you will catch a glimpse at the Uganda Kobs, lions, buffaloes, leopards, warthogs, topis, civet, hyenas, aardvark, bush babies and many others.

This is a must do on a Uganda safari in Queen Elizabeth National Park. Launch cruise is conducted along the Kazinga channel., which is covers about 40 kilometers and links to Lake George and Lake Edward which offers the refuge to the protected area’s most prominent wildlife species and it is shoreline allures variety of the bird species, mammals and reptiles. Launch cruise in Queen Elizabeth National Park is done two times a day, early in the morning and the other in afternoon.

Queen Elizabeth National Park features among the most Important Birding Areas in Uganda. Over 620 avian species are found within the park and the notable species include bee eaters, eagles, 11 kingfishers, vultures, flamingos, falcons and many more.

Maramangambo tropical rain forest features variety of primates and bird life and interestingly, there are several trails that offer opportunity to visitors to discover in and around this stunning forest and its surrounding Lake Nyamusingire. Wildlife viewing around the area differs daily but you will be amazed by the bat cave with a resident bat hungry python and the copper rich blue Lake.

Chimpanzee adventures are conducted in the Kyambura gorge in Queen Elizabeth National Park. The habituated chimpanzees thrive within the 100 meters deep gorge carved by River Kyambura which flows across the mighty rift valley floor towards the Kazinga channel. Guided nature walks to look out for the chimpanzees begin at Kyambura fig tree camp at 8:00 am and 2:00pm.

How to get to Queen Elizabeth National Park?

Queen Elizabeth National Park features many accommodation facilities that are widely distributed in and around the park. The Mweya Peninsula and the North circuit features a number of safari lodges, restaurants, campsites, hostels, budget food options and departure points for the Kazinga channel boat cruise. The notable safari lodges around this place include the Mweya Safari Lodge, Hippo Hill Camp, Bush Camp, Simba Safari Camp and Mweya Hostel at Mweya Student Camp, Rwenzori Salaam Lodge and many more.

The Ishasha plains which stand within the 100 kilometers southwest of Mweya and features as the most sought after sector for wildlife viewing in the park. It features a number of safari lodges that include the Ishasha Ntungwe River Camp, Savanna Resort Hotel, Wilderness Camp, Ishasha Campsite, Simba Miti Camp and many more.

In conclusion, Queen Elizabeth National Park is ideally one of the most attractive safari destinations that are worth exploring while on safari in Uganda.