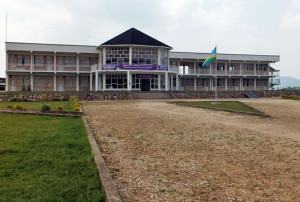 Workers of Mpanga prison recently had a tour of Murambi Genocide museum situated in Southern Rwanda, 3hrs drive from Kigali city! This is one of the popular tourist attractions for Rwanda safaris in Africa. In their views, Mpanga Prison workers said that their tour to Murambi genocide site gave them an insight in their work after witnessing the evidence of the 1994 Rwanda genocide. They got first hand information about the genocide from stories told by survivors employed in the museum.

Mpanga Rwanda safarisprison workers were learnt more about all that took place before, during and after the 1994 Rwanda genocide against Tutsi in general and specifically the history of former Gikongoro prefecture. During this tour around Murambi genocide museum, Mpanga prison workers also got to witness the evidence of the 1994 Rwanda genocide that was done to Tutsis specifically those who had sought refuge in the buildings of the school that was still under construction at Murambi hill at the same place this memorial site was built.

Eugene Bisengimana the acting director of Mpanga prison pointed out that, the fact that their workers managed to take a tour around Murambi museum has left them more understanding of some things some of them took for granted as some of these workers were still young and others were not born during the 1994 genocide. The stories told made them feel as if they were part of action.

According to the number provided by workers of this memorial site states that about 50.000 Tutsis were killed at Murambi hill and most of them are laid to rest in Murambi memorial museum. Rwanda genocide sites attract many travellers from allover the world to Rwanda on addition to gorilla trekking safaris in Parc national des Volcans, primate tracking in Nyungwe National Park, cultural tours and wildlife safaris in Rwanda and nearby countries like Uganda, Kenya and Tanzania. Reports from the Ministry of tourism Rwanda show that majority of the visitors to Rwanda on gorilla trekking always ask the tour operators to visit some of the genocide museums in the country. They get true fact at the scenario during the 1994 genocide.